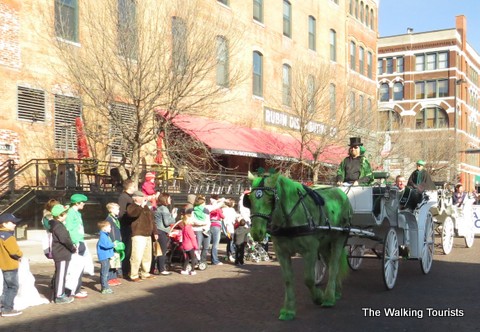 Combining history and food is the goal of Omaha Culinary Tours.

Omaha’s Old Market district is ripe with history…and food. It’s a perfect fit for one of the young company’s food tours.

The Old Market once served as the warehouse district downtown. Several of the original buildings still stand.

As Omaha grew and progressed, the warehouse district felt the effects. Now, the Old Market serves as one of Omaha’s major tourist attractions. It is home to unique shops, hotels, restaurants and bars. 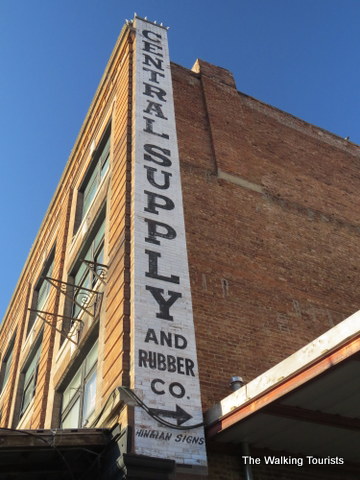 Our tour started at M’s Pub, near 11th and Howard streets. The restaurant, along with its neighbor Vivace, sits in the former Central Supply Company warehouse. Central was an agriculture supplier. 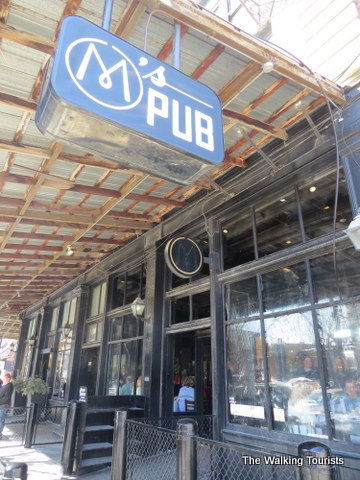 Since the same people own both restaurants, they cut a hole in the wall between the eateries to store vegetables.

M’s Pub struck me as an upper class restaurant…before I actually entered it. I always had the impression it was a fancy place. I was wrong. It’s a nice casual dining place, with a nice selection of sandwiches, dinners and wine.

In all fairness, I have always had the impression that most Old Market restaurants are ritzy places. I have no idea why. We have a nice combination of all types of restaurants there.

Anyway, the restaurant was started in the 1970s as a sandwich shop. They’ve continued to serve the original sandwiches while growing the menu.

M’s Pub has a nice selection of menu items for reasonable prices.

We tried the Lahvosh. M’s Pub has a reputation for good Lahvosh. It’s similar to a pizza. It’s made with Armenian cracker and Havarti cheese. Three samples were served. One was all vegetables. 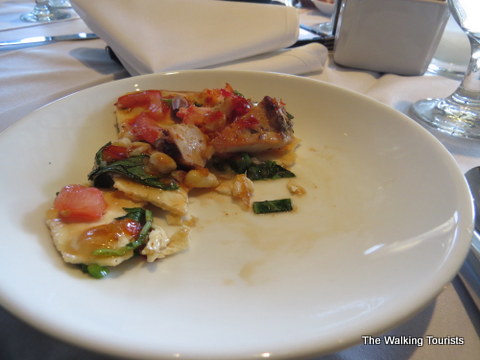 The one I enjoyed was a Thai chili chicken Lahvosh. It had a nice bite. It wasn’t overpowering with the heat.

We had an interesting tour, as it coincided with Omaha’s St. Patrick’s Day parade. I think the noise associated with the parade likely reduced the amount of history we would have been told about as we walked to our next stop. 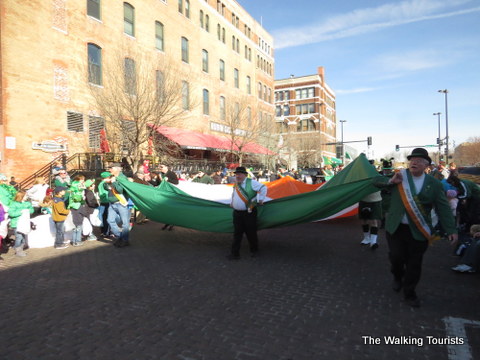 Plank Seafood and Provisions is preparing for its first anniversary in the Old Market. In less than a year, it’s made a name for itself. It was named “Best New Restaurant” in Omaha Magazine’s “Best of Omaha” polling. 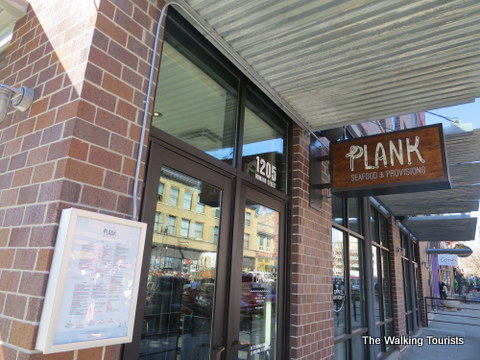 Plank is in a newly renovated building. Its specialty is oyster.

As you walk in, you see oysters in ice at the bar. 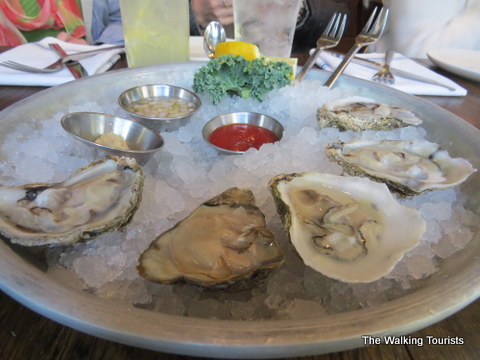 We tested oysters and cheese curds, as well as a salmon appetizer. 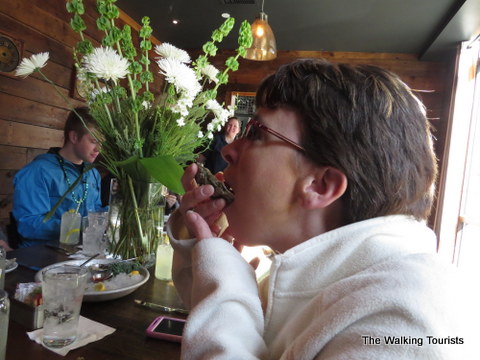 Not being a fish/seafood guy, I let everyone else partake. Lisa’s aunt and uncle (Vicki and Bryan) joined us on the tour. They all three liked the food. The rest of the group did, also. 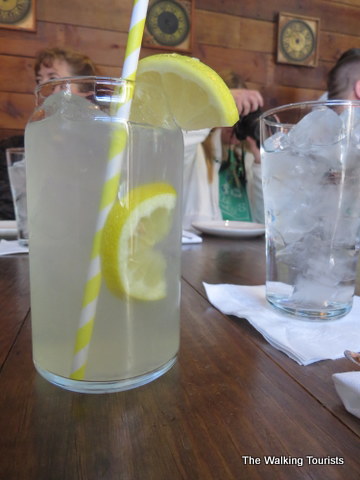 I did like the freshly made lemonade we had for drinks.

Plank is a reasonably priced restaurant. 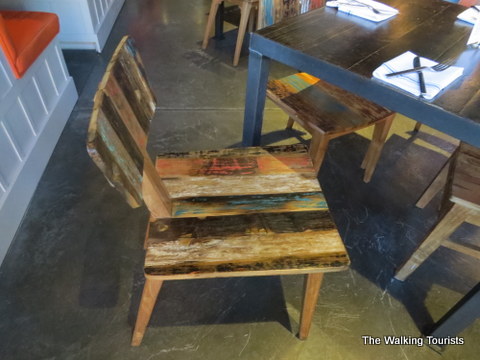 As we made our way back through the parade viewers (and the parade itself, but don’t tell the Ancient Order of Hiberthians – parade sponsor), we checked out an old building that once housed a coffee plant. Now, it’s a bank among other things – including a coffee shop (Scooters). The irony? 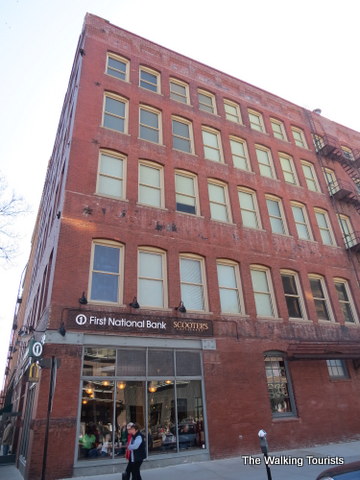 Our next stop was The Indian Oven.

The Indian Oven (Now Closed for business)– opened in 1973 – was once the only East Indian restaurant between Denver and Chicago. 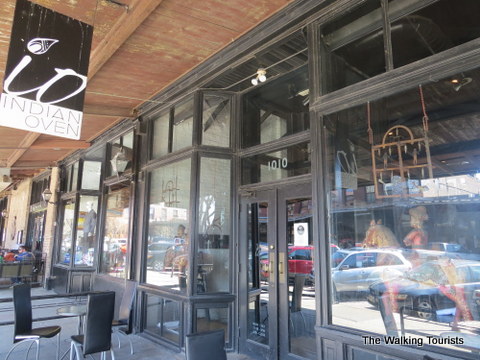 Now, as Indian restaurants grow, they probably have a historical connection to the Omaha location, according to owner Binoy Fernandez. Binoy took over the restaurant from his parents.

They use spice to add flavor to the food, without trying to overpower the senses, he said. 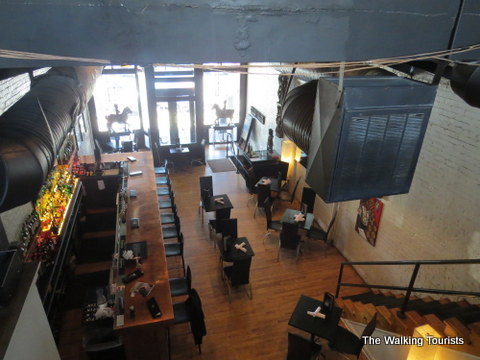 “If you want to sweat, we can make that for you,” he laughed.

But, the food itself does have the right amount of spices.

East Indian food has traditionally made use of spice. This could be because in the early days, the quality of meat they had – lamb or goat – wasn’t very good. So, to flavor the meat, they added spices, Binoy said.

“These are things you could stop by a street vendor in Bombay and buy,” he said.

Among the items we tried were a couple of vegetable fritters and a meat samosa.

I enjoyed the samosa most.

Our fourth stop was at Vivace (now closed for business) for contemporary Italian food. Vivace focuses on northern Italian food. 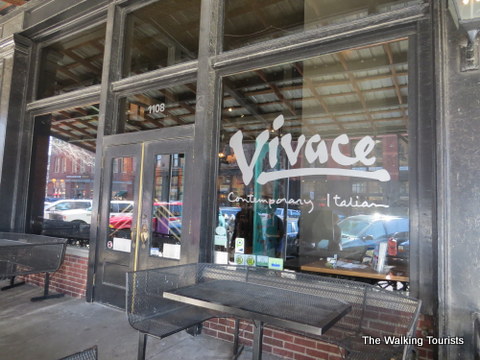 The décor is interesting. The bar is from a place in Texas. The marble top on the host stand is from an old church.

The far wall is brick and has a few items hanging on it. I like the uneven appearance of it. Some of the brick juts out from the wall. I think that definitely helps give Vivace its own flavor. 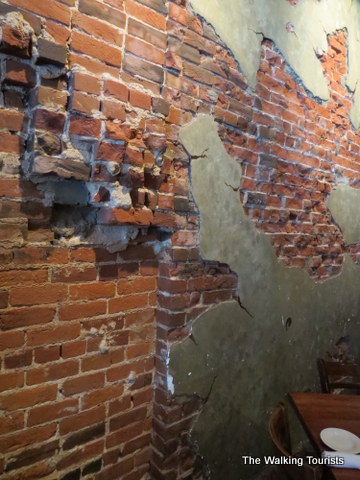 We tried a couple of pizzas. The vegetables they use are fresh. 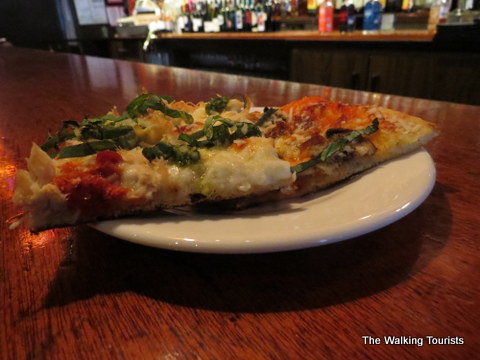 They are very determined in the types of tomatoes they use for the sauce. They have tested a few, before settling on their special style.

The flour used for pizza is brought in from the east coast. This is because they like to have a Neapolitan-style pizza. It’s not made in the Neapolitan process, so that’s why they say “style” in describing the pizza preparations.

They allow the dough to “yeast naturally.” They don’t add any yeast. The dough is allowed to set refrigerated for 2-3 days before being used.

Again, the restaurant is very affordable for a nice meal.

Our next stop was V. Mertz in the Passageway. The Passageway is one of the most photographed spots in Omaha. It’s popular for family, engagement and senior photos. The building’s management now restricts photography there.

V. Mertz is an upscale restaurant.

The ownership and management wants people to feel like they can come in for any celebration of evening out and have a relaxing time.

While the menu is on the higher end of the spectrum for my taste ($30 for a dinner entrée), I can understand why people like the place. 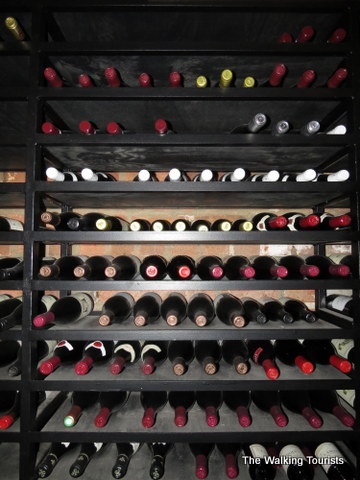 We tried a sample of homemade ice cream – a purple potato and walnut treat. Before you go yuck, open your mind and palate. It had a chocolaty taste to me. It was really quite good. 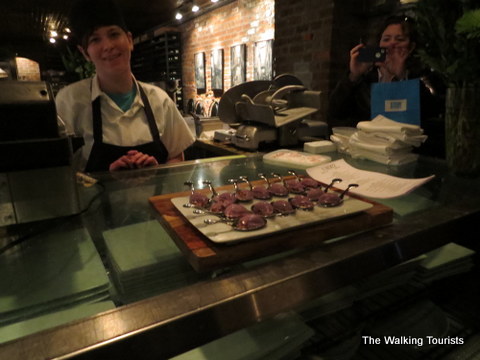 We tried a soup. It had an interesting taste. 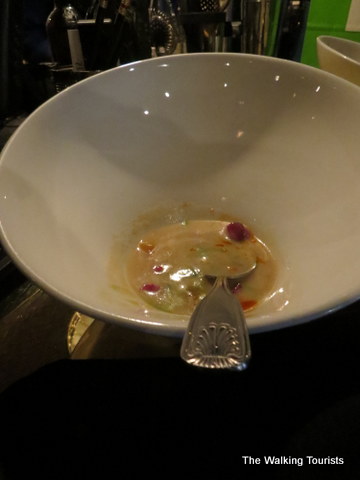 Our dessert was tasty – a macaroon.

V. Mertz has a stand-up bar. That’s mainly because the floor is uneven, the owner joked. It’s a bit cramped around the bar, but it would be a cool place to stand and have a drink.

Our final stop was a bakery. Oh yeah!

Bliss Bakery has been seen on the TV series “Cupcake Wars.”

The bakery makes more than cupcakes, as we saw some delicious-looking cinnamon rolls. 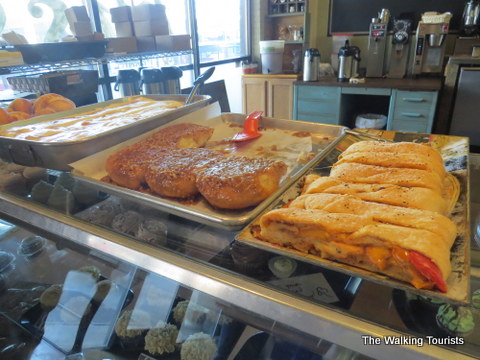 The cupcakes we tried were mini mint chocolate. The cupcake was chocolate with a cream cheese frosting with a hint of mint. It was topped with a piece of mint candy. Yum! 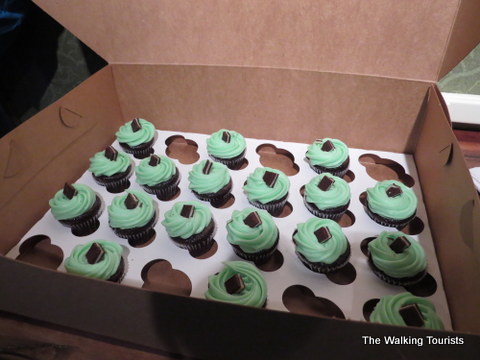 Well, as usual, Omaha Culinary Tours chose well for a food tour. The Old Market is a natural fit for such tours because there are so many local restaurants, as well as a long history that can be told.

In fact, OCT has thoughts to rotate the Old Market restaurants on the tour, because of the variety. That can help bring back customers, since no two tours would likely be the same.

This was our second food and history tour with Omaha Culinary Tours. We previously strolled the streets of Midtown Omaha – https://thewalkingtourists.com/omaha-culinary-tour-serves-food-history/.

Lisa’s aunt and uncle agreed the tour was worth the trip to the Old Market. They’d be interested in future tours. I think that’s a better recommendation than me saying it. But, again…I can’t keep my mouth shut or fingers to stop typing. All four of us in our group had a great time and look forward to future tours. 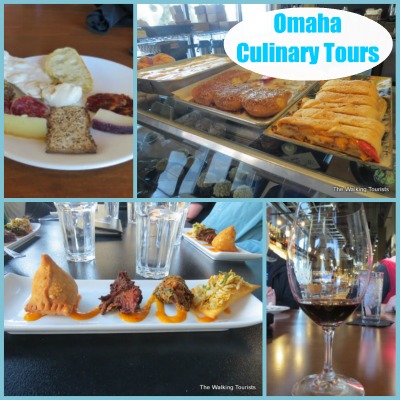 DISCLAIMER: Thanks to Omaha Culinary Tours for the complimentary tour for Lisa and me. However, all opinions and thoughts are ours.