Omaha’s public art worth the viewing 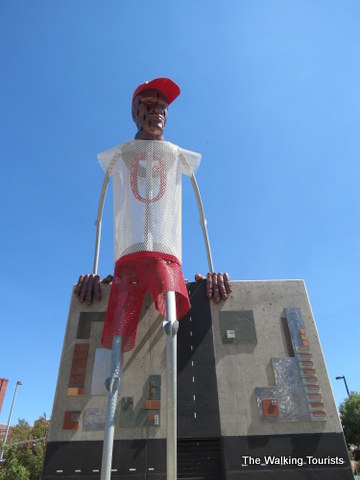 From the Missouri riverfront to western Omaha, the city has taken an interest in its public art displays.

Omaha has joined the trend of other cities in offering its residents and visitors artwork outside of museums.

As visitors cross the Missouri River from Iowa on Interstate 80, they are welcomed by a set of Union Pacific trains.

Along the riverfront, the famed “Labor” sculpture stands between the popular Lewis and Clark Landing to the country’s longest pedestrian bridge crossing two states – the Bob Kerrey Bridge. 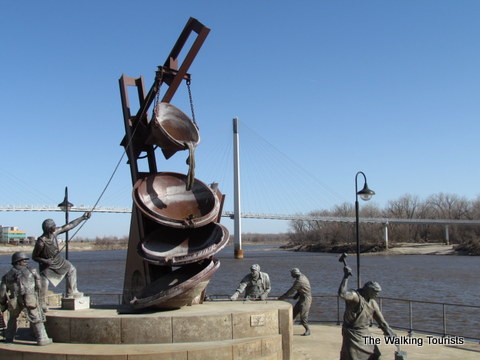 The Landing area is home to several summer festivals, but the Labor sculpture comes into play as party of Septemberfest – a celebration of Omaha’s labor unions and workers. Several informational signs are located along the riverfront.

The sculpture – by artist Matthew Placzek – also gained fame three years during the Great Flood of 2011. At the height of the river’s flooding, a hand holding a hammer became a symbol for measuring the height of the flood waters along the Landing area. 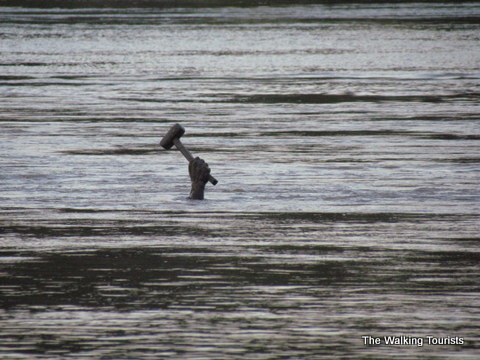 Heartland of America Park is home to the majority of the city’s war memorials. 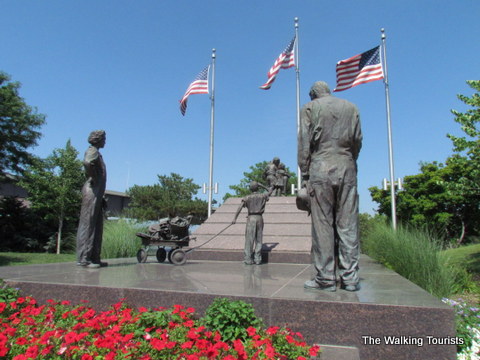 The largest on display is the World War II memorial. It depicts the sacrifices made by Americans during that war. A man hugs his family, I imagine as he readies to depart for battle. A little kid stands alongside a wagon and renders a salute. 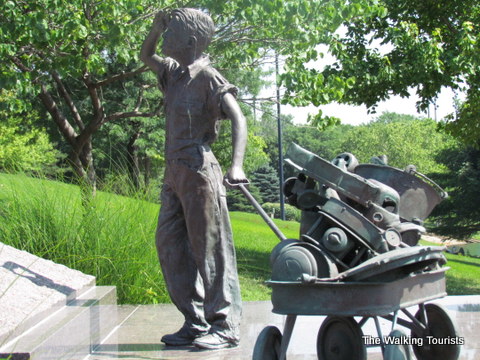 A woman stands wearing overalls, taking on a job in support of the war effort.

A few feet away is the Airborne paratrooper memorial. 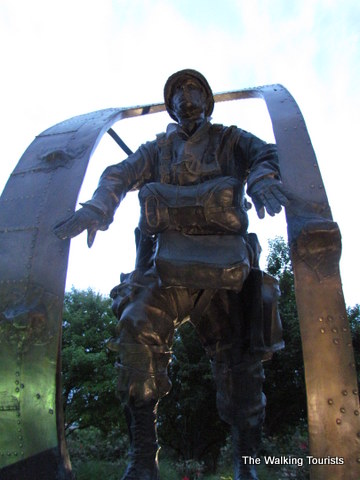 The park consists of several pieces – wagons drawn by oxen, people walking alongside, as well as a cowboy atop a horse. He stands on top of a hill overlooking the other travelers. 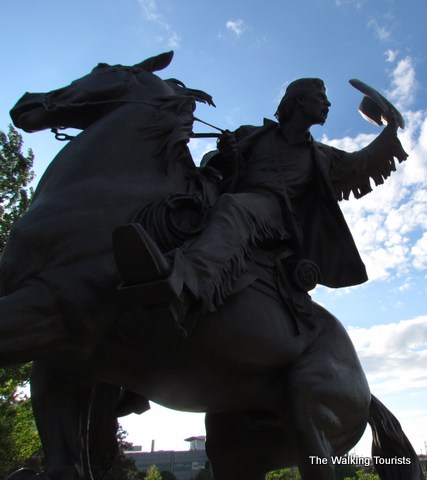 Up the street a few blocks is Joslyn Museum. In its sculpture walk are two statues of Native Americans. These pieces recognize the history of Midwestern tribes. 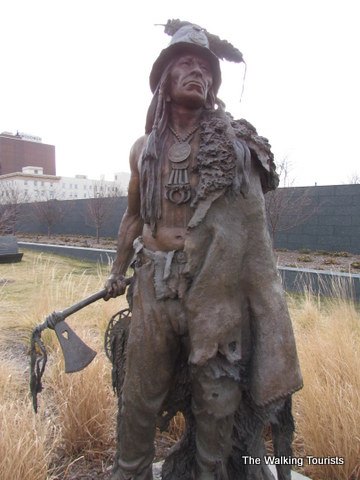 Across the street from Omaha’s TD Ameritrade baseball stadium is “Fertile Ground.” It’s one of the nation’s largest public art murals. It is 32,500 square feet. The Kiewit Foundation donated the artwork to the city in 2008. It recognizes the history of Omaha. It used actual people in the paintings.

On the north side of town stands a statue honoring Omaha’s role in blues music. A trio of performers stands in Dreamland Plaza.

Heading south, Omaha shows its Hispanic flavor with the Tree of Life. Nearby is a mural recognizing life in Omaha. 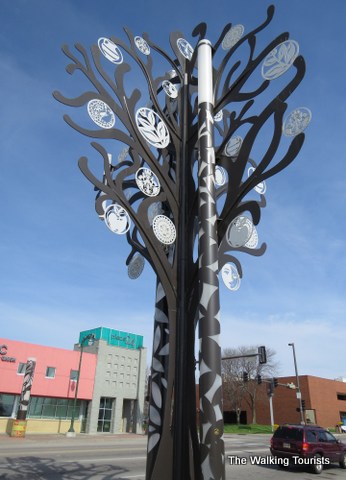 Using old grain elevators as the canvass, a group of artists told stories or sent messages. Emerging Terrain organized the art on 26 silos that are not used any more. The art display sits prominently off Interstate 80. Some of the art tells the history of the area. Some send messages about energy. Whatever the message, the art work is impressive. 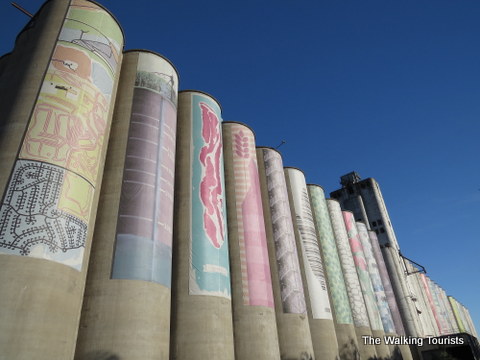 Scattered throughout the city a few years were J Doe sculptures. Non-descript body statues were painted with various scenes or colors by several artists. Other cities do similar campaigns – Sioux City used the dog from Lewis and Clark’s expedition. Other cities have used bison and fish. 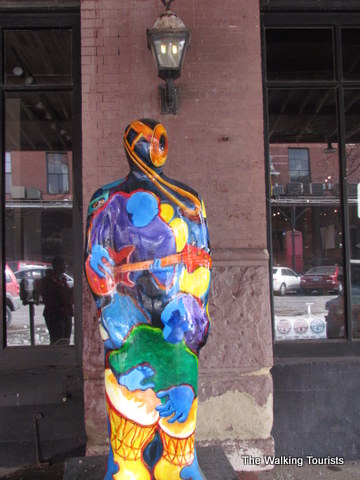 In midtown Omaha, the city recognizes one of the greatest race horses in history. Omaha was a winner of the Kentucky Derby decades ago. A sculpture recognizes the horse, which was buried in the old Aksarben horse track area.

Near the Aksarben area sits the University of Nebraska at Omaha. In recent years, the school has made a concerted effort to enhance the campus area with artwork. 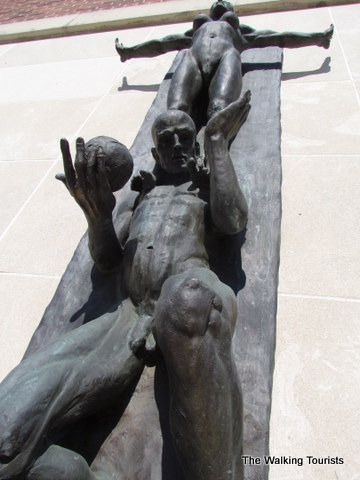 On the main campus stands “Knowledge” by Littleton Alston.

Near the former football stadium named after him, a small sculpture honors former coach Al Caniglia. He was the all-time winningest coach for the Mavericks for decades, until Pat Behrns eclipsed him earlier this century. Without a football program for three seasons, the field is now home to Mav soccer. 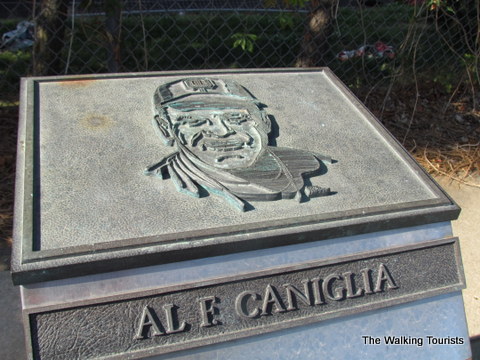 On the Aksarben campus, the school has placed several pieces.

One of my favorites is a crane in a group of cattails. 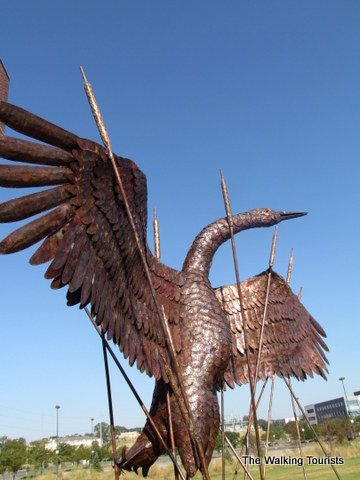 Other pieces include modern pieces.

UNO took a creative approach to a bike rack by using school colors and the athletic Mav logo. 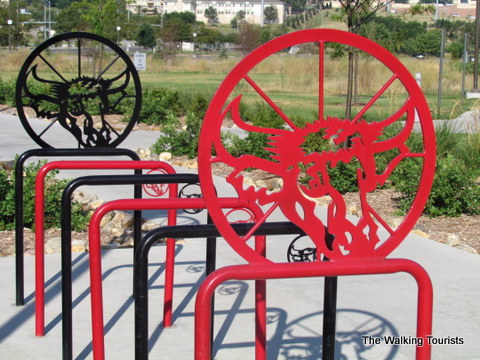 Heading to west Omaha, Valmont Industries has a cool sculpture at its Omaha office. Valmont is a maker of irrigation pumps and has an international client base. Thus, its Omaha office displays flags from countries with clients.  In front sits a sculpture with the globe atop of a neat base.

Boys Town is an internationally home for boys and girls. It gained fame in its early days when Father Flanagan opened a boys home to help wayward kids. The story was memorialized in the Oscar-winning movie, “Boys Town,” starring Spencer Tracy and a young Mickey Rooney. 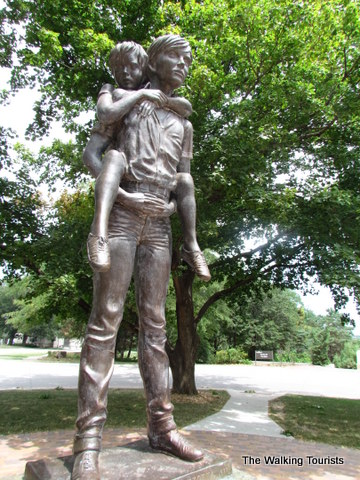 The statue that welcomes visitors to the campus is also probably just as famous – a boy carrying another on his back. Its name – “He Ain’t heavy, He’s My Brother.”

The store has sculptures of four presidents outside the store – George Washington, Thomas Jefferson, Abraham Lincoln and Ronald Reagan. 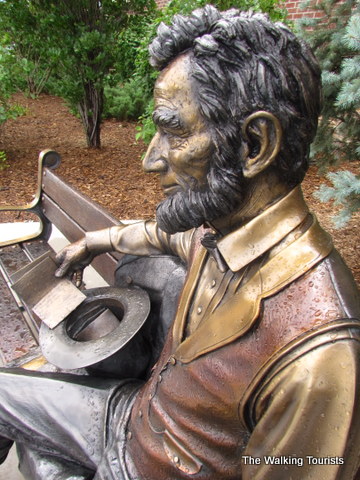 Omaha’s public art traverses the landscape. From the history of Omaha to recognizing business, Omaha has taken a keen interest in sharing its art.

Next time you are out and about in town, or any town or city for that matter, take a few minutes and recognize the art being shared with us. 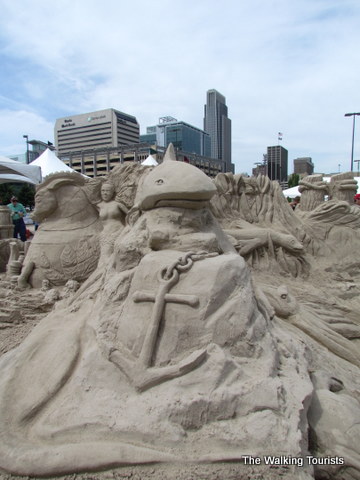